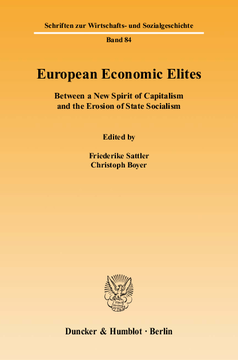 Since the beginning of the 1970s, democratic capitalist Western Europe as well as state-socialist Eastern Europe faced the double challenge of the third industrial revolution and the second globalization. The accelerated political, social, economic and cultural change did not lead to a crisis "of capitalism" or "of communism", instead challenging European industrial society as such. In 1989, after a long erosion process, state socialism failed at the task of solving the manifold problems of adjustment; yet a lasting solution is also not conceivable within the context of a neo-liberal "new spirit of capitalism".The present volume, which arose from the interdisciplinary cooperation of historians and social scientists, discusses the consequences of this "great transformation" for the economic elites in both "West" and "East": for their qualification profiles and their social composition, their options and their room for maneuver, their value systems and legitimization strategies, their self-perception and their public image. Economic elites in both systems saw themselves forced to adopt new strategies which very often seem quite different at the surface; looking deeper, they exhibit clear similarities. After 1989, the consolidation of the post-socialist economic elites has, all in all, been completed according to the Western example. The emerging convergences, which are being supported by the process of European integration, contributed to the internationalization of the European economic elites. The volume discusses the problem how strong this tendency was and if it has already created truly transnational economic elites more or less separated from the national context.The contributions, which are embedded into a coherent interpretative framework, are penned by internationally renowned experts and junior researchers from a wide array of countries, from Britain to Poland and from Norway to Portugal. The innovative value of the volume lies in its Europe-wide scope and, above all, in its comparative East-West perspective. A genuinely European community of researchers tackles a topic which is indisputably current for history as well as for the social sciences.