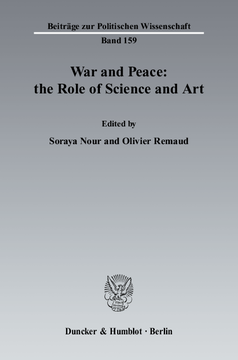 War and Peace: the Role of Science and Art

The essays gathered in this volume investigate the role of science and art in issues of war and peace through various disciplines and theoretical traditions. How does philosophical anthropology explain why humans can be so violent? How do psychoanalysis and neuroscience regard the fact that, rather than pursuing happiness and freedom, humans seem to prefer the destruction of others and themselves? How is violence incorporated into language? How do the social sciences construct a depreciative view of the enemy and the myth of a national, superior identity? How have the natural sciences been involved in domination or cooperation between countries? How does art defame or value the other? How can one shield science and art from the logic of war, making them a common good for humanity and a foundation for peace?Many reflections are discussed here with regard to Kant, Hegel, Alexander von Humboldt, Novalis, Schlegel, Schopenhauer, Tolstoy, Freud, Einstein, Ortega y Gasset, Clausewitz, Canetti, Bourdieu, Rawls etc. This volume stands alone in clarifying the role of science and art in war and peace analytically and historically while also linking it to a number of contemporary implications.