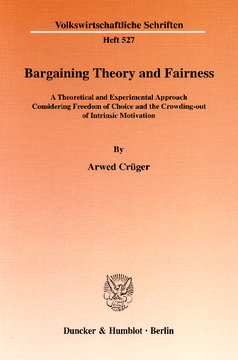 Two new bargaining games, called "Freedom to Punish (FTP)" and "Right and Choice to Punish (RAP)", are developed, analyzed and tested by means of an experimental implementation. Hypotheses about behavior are developed, discussed and tested. The central hypotheses are aimed at the importance of freedom of choice, on the difference between the FTP game and the RAP game, and on the crowding-out of intrinsic motivation. As might have been expected, fairness plays a role in both games, represented by the frequent appearances of equal splits as well as by the frequent rejections of unfair offers.In addition to that, fairness was crowded out by the new Institution of a veto power decision, confirming the importance of the institutional setting for behavior. Contrary to the few veto power sales in the RAP game, an amazingly high number of receivers refrained from veto power in the FTP game. This significant difference has clearly been attributed to the different information conditions and the existence of a bonus. This bonus can be interpreted in terms of freedom of choice, and exploits a value for the freedom to choose for the first time in experimental economics.