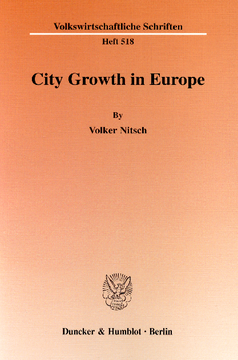 One of the most notable features of literature about "new economic geography" is a close association between theoretical and empirical work. In contrast to earlier research, theoretical studies are often much more strongly focused on real-world phenomena. At the same time, empirical work is often more closely tied to theoretical models. Instead of purely detecting possible stylized facts, considerable efforts have been made to test for the relevance of theoretical results.A major shortcoming of recent empirical work in urban economics is, however, the startling concentration on basically only two estimation strategies. Probably driven by limited data availability, most analyses are either cross-country studies which usually seek to explore a data set as rich as possible, or the studies examine single country data and then often focus on U.S. experiences.This book aims to provide a new - European - perspective. The basic idea is that a focus on European cities, apart from being interesting for itself, allows to combine both previous approaches. In particular, there is considerable cross-country variation while, in addition, also reliable historical data is available. Therefore, it is one of the contributions to compile a new data set of European cities which covers 13 countries and ranges from 1870 to 1990.This set of data is then applied to explore several hypotheses which have been recently proposed in literature. In particular, three sets of issues are discussed: the growth pattern of cities and their implications for Zipf's law, the relationship between trade openness and urban concentration, and the role of history for city growth. The results are often striking. In contrast to some previous findings, for instance, there is only weak evidence for random growth across cities. Also, the empirical evidence for an association between external trade and internal geography turns out to be shaky. Finally, it is argued that the urban dominance of Vienna after the dissolution of the Austro-Hungarian Empire in 1918 is evidence in favor of path dependence in city growth.Taken together, the book shows that the European experience provides a rich laboratory of real-world data which still waits to be explored.