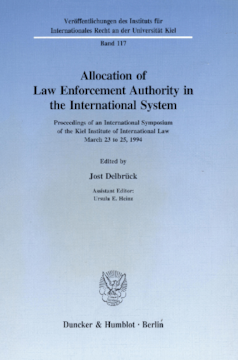 Allocation of Law Enforcement Authority in the International System

The 1994 symposium of the Kiel Institute of International Law, the papers and proceedings of which are hereby made available to the public, takes up not only the general theme of the 1989 conference, i.e. »Strengthening the World Order: Universalism v. Regionalism. Risks and Opportunities of Regionalization«, but also continues the discussions pursued during the 1992 symposium entitled "The Future of International Law Enforcement. New Scenarios - New Law?" The 1994 symposium also continues the now established tradition of bringing together international legal scholars from the United States, on the one hand, and Germany and other European countries, on the other hand. The Institute is strongly convinced that the transatlantic dialogue on the burning issue of strengthening the international legal order as part of an emerging »New World Order« is essential. It was all the more regrettable that for purely accidental reasons the participation, on the European side, by colleagues invited from Poland and other Central and East European countries could not materialize. The focal point of the 1994 symposium was the question as to whether and to what extent the United Nations as a law enforcement agency can be supplemented by regional arrangements/organizations and the state as a law enforcement agent in the international public interest.