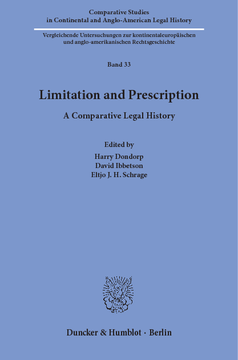 Harry Dondorp has been teaching Roman Law and Legal History at the Free University Amsterdam since 1979. He published notably on the history of Canon Law and in the field of the Comparative Legal History. David Ibbetson has been Regius Professor of Civil Law at the University of Cambridge since 2000, and President of Clare Hall, Cambridge since 2013. From 2009 until 2012 he served as the Chair of the Faculty of Law, Cambridge. Eltjo Schrage retired as a Professor of Civil Law at the University of Amsterdam in 2010. He has been an honorary professor in the Nelson Mandela University in Port Elizabeth, South Africa since 2007.

Within both the Civil Law and the Common Law we find means of acquiring and losing rights, or freeing ourselves from obligations by the passage of time. The ratio thereof is twofold: (1) In the words of Oliver Wendell Holmes, Jr. »Sometimes it is said that, if a man neglects to enforce his rights, he cannot complain if, after a while, the law follows his example« and (2) A claim should not hang above the head of the debtor as if it were a Damocles’ sword, or on the words of Best CJ »long dormant claims have more cruelty than justice in them.« This ratio is and has been felt strongly in every jurisdiction, but legislation, case law and jurisprudence but the specifications thereof show substantial dissimilarities, notably between the Common Law and the Civil Law, even thus that in recent times several Law Commissions reported about future modifications and other jurisdictions enacted new legislation. This book gives the necessary historical background on a comparative basis.