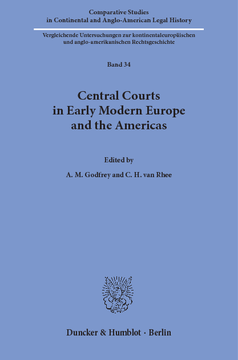 Central Courts in Early Modern Europe and the Americas

A. M. Godfrey is Professor of Legal History at the University of Glasgow. His research and teaching interests are in legal history and the law of obligations. His main research field is the history of central justice, law courts, jurisdiction and dispute settlement in medieval and early modern Scotland. He has published extensively on the origins and development of the Court of Session, on the foundation of the College of Justice in sixteenth-century Scotland, and on early modern litigation and arbitration. With Heikki Pihlajamäki and Markus D. Dubber he has co-edited »The Oxford Handbook of European Legal History« (2018). He is a member of the editorial committee and former editor of »The Journal of Legal History«. Prof. Dr. C.H. (Remco) van Rhee is Professor of European Legal History and Comparative Civil Procedure at Maastricht University in the Netherlands.

The intimate connection between medieval royal government and the administration of justice led to a new generation of centralized law courts emerging in early modern Europe. Some were newly created institutions, but often they were associated with the evolution of the judicial role of royal councils, or equivalent bodies, which sat outside the ordinary course of justice. Typically these were empowered on behalf of the sovereign to make interventions in legal process on grounds of equity. Legal change of this kind was connected with the development of the state, and reflected the way that enhancement in the exercise of centralized judicial authority could be a powerful force reshaping the administration of justice more generally. The contributions to this book seek to examine how such newly created or reformed central judicial bodies (in Europe but also to some extent in European colonial settlement in the Americas) became integrated into the wider structures of jurisdiction within states, with a superior or even supreme jurisdiction. A particular emphasis is given to exploring how their jurisdiction and authority related to other more political institutions of central governance with an adjudicative role, such as parliaments or privy councils.