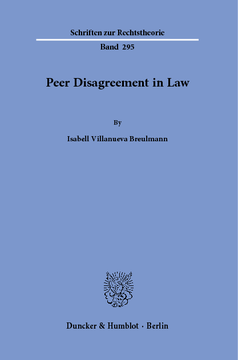 Philosophers have been puzzled for quite some time by the fact that intelligent and generally reasonable individuals who are equally well-informed and familiar with the same bodies of evidence still disagree with one another. Legal theorists wonder why this is puzzling for philosophers in the first place as disagreement is the very foundation of their work. This book, placed at the intersection of philosophical epistemology and jurisprudence, deals with the theoretical challenges that disagreements between judges create. The philosophical debate is applied to German and American legal disputes. How can such disagreements be integrated into the general philosophical debate on »peer disagreement« and into the legal theory of judicial decisionmaking? How should one deal with such disagreements under the existing legal framework but also in terms of legal policy?