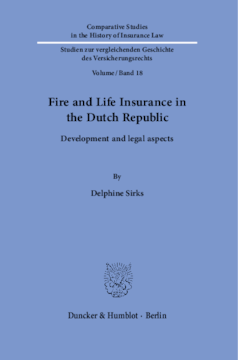 Fire and Life Insurance in the Dutch Republic

Delphine Sirks successfully completed both her bachelor’s and master’s degree in Dutch Law at the Universiteit Leiden. Having spent semesters abroad at the Ruprecht-Karls-Universität Heidelberg, the Universität Wien and the Université Jean Moulin Lyon 3, as well as a research period at the Royal Netherlands Institute in Rome as a student, she took the opportunity to conduct her PhD research in legal history at the Universität Augsburg within the ›A Comparative History of Insurance Law in Europe‹-project, which she successfully defended in a joint doctorate at the Vrije Universiteit Amsterdam. She currently works at the latter university as an assistant professor in legal history.